Our son has a monster. It lives in his head. Sometimes the monster sleeps quietly and we forget that he's there. At other times, the monster whispers to our boy, creeping into his brain on tiptoe. There's no doubt that monster is weaker than it used to be, but there's also no doubt that he's still very much alive.

The last week has been tough. Settling into grammar school is challenging for anyone, but if you have to do it whilst pretending that your monster doesn't exist, it's exhausting. Ollie eats his morning snack and his lunch under staff supervision in the Learning Support Area. He misses most of a Tuesday every week for his hospital appointments. This week, he had his longest and most distressing flashback yet, in school. The staff were excellent in dealing with the situation, first finding his brother to comfort him, then calling me. I arrived to find my sons curled up on the floor, wedged under chairs, surrounded by screens and watched over by staff. I took Ollie home and he missed yet more school.

At home, Ollie's anxiety is ramping up. He is stressed about his homework, wanting to do it absolutely perfectly as soon as it's set. He checks, double checks and triple checks his school bag. He packs his PE kit over and over. He is convinced that his water bottle will leak and ruin everything in his bag.

Every evening Ollie writes his "thought diary", as a record of all the intrusive anorexic thoughts he experiences during the day. It's a stark list of anxieties and rules. Ollie compares himself to his brother constantly, right down to how he holds his body. He scrutinises Adam, and has to do more activity than him; he has to watch whether Adam's head is up, whether he is resting his arm on the table, whether he is tapping his foot. Ollie wants to make sure that he eats less than his brother, and moves more than him. It's constant. At school, Ollie compares himself to his classmates in the same way. Anorexia is controlling his thoughts and actions all the time.

Yesterday was our hospital day. We talked about the flashbacks, and we were happy to hear that Ollie has a therapist lined up who specialises in both eating disorders and PTSD. We spoke to parents and professionals, and the overwhelming message was that we need to be on anorexia watch 24/7. Any hint of anorexic behaviours have to be squashed immediately. Ollie has a serious eating disorder, right now, all the time, and he needs help with it. He needs us to both police the anorexia and to be kind and loving to the scared child. We can't take our eyes off him.

The problem is that we're tired. And we're unprepared. We have been so focused on getting Ollie home from the inpatient unit, that now, two weeks laster, we're realising that the hard work is only just beginning. Discharge from hospital wasn't the end of anorexia, but the beginning of our long fight against it. One of the parents told us to expect this to last at least two years. That thought is frankly horrifying.

When we were expecting our first baby, I read all the books I could find about pregnancy and birth. I researched and planned and worried. When our baby was born, we had lots of help in hospital. Then we came home. Suddenly we were completely responsible for a tiny person, and we had not read anything about how to care for him. We had to feed him, to respond to his needs, to keep him alive, all without a manual. It would have been better to research baby care, the bit that we had to do on our own, than to obsess about birth, as we had medical help for that.

This is how we feel now; we had focused on the wrong thing. We had help whilst Ollie was an inpatient, and we had lots of support to get him to discharge. Now we're on our own again, for most of the week at least. We haven't yet worked out how to best care for Ollie. But we'd better work it out quickly, as we can't afford to get it wrong.

Ollie's monster is living in our home, but only Ollie can see him. We have to remind ourselves that the monster is here. We have to keep that monster under control, we have to discipline it, and to comfort Ollie when it gets too loud. We can't take a day off, because the monster doesn't. We can't just check the monster into the kennels and go on holiday. Instead it comes everywhere with us, like a lingering curse.

We need to take a deep breath, to stand shoulder to shoulder, and get on with the business of beating that monster. 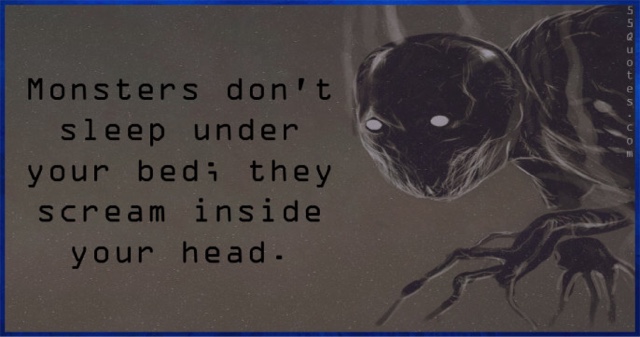