When anorexia swallowed up our son, we were bracing ourselves for a very long hospital stay. He was admitted to the specialist unit on April 24th, and we mentally wrote off the rest of the year. The consultant told us that eight months was a reasonably standard length stay. We set our sights on the new year, and hunkered down.
Ollie was formally discharged from the unit on August 29th.
Ollie's illness has been unprecedented in its severity and incredibly rapid progression. He crashed within weeks; he was life-threateningly ill, mute and tube-fed, in a very short timescale. His months spent at his lowest ebb were horrific, but by anorexia's twisted standards it was brief. His rise, then, was meteoric: the staff at the unit told us that they had never seen anything like it. We are left exhausted and bewildered, fiercely proud and protective of our son. We are looking to the future and trying not to let the fear overwhelm us.
Today is Ollie's first day at grammar school. This morning he lined up in the playground, along with all the other 11-year olds, wearing his shiny oversized uniform and a worried expression. He looked just the same as all the other nervous first years. No-one would guess what he has been through this year.
We know that he has a long way still to go. He will miss school every Tuesday so that he can attend various appointments at Great Ormond Street Hospital. Eating is still a huge challenge, and we are very much governed by his prescribed meal plan. We will have to monitor his exercise carefully, and adjust his calorie intake accordingly. But none of that even scratches the surface of the real work that still has to be done.
When the illness was at its worst, the relentless voice inside Ollie's head punished him for everything. He wasn't allowed to eat, and if he allowed himself to be fed (this was always via NG tube, using considerable force), he would be punished. The voice told Ollie that he didn't deserve to be looked after, to have clean teeth, to watch TV, to smile, to change his clothes; he had to live in abject misery and he had to suffer constantly. The voice is now silent, but we worry that it's not far away. We fear that it might start speaking to Ollie again, and we're constantly on the lookout for possible triggers.
Yesterday, Ollie's grandmother made an innocent remark that brought these fears to the forefront of all our minds. When she was saying goodbye to Ollie, she patted him and said "oh you're getting lovely chubby cheeks". The blood drained from Ollie's face and there was a sharp intake of breath all round. My husband admonished his mother for making this comment, and she immediately panicked, apologised, tried to explain her innocent intentions. I could see the darkness in Ollie's eyes. It was, quite possibly, the absolute worst thing anyone could have said, and I was enraged and terrified on his behalf.
This could have been disastrous, but Ollie coped. Today, he's at school, without us watching him, and my fear of all the possible triggers is making me tremble. He has taken a packed lunch, but will he eat it all? Will he tell people about his anorexia? If he does, what will his peers say? Will his form teacher (who has been briefed) say anything? Will Ollie feel like the freaky kid if the Head of Pastoral Care comes to speak to him? What is happening, right now, during his first ever rugby lesson?
The anxiety runs deep. But so does the euphoria: Ollie was expected to spend the year in hospital. The fact that he has been able to start the school year is almost unbelievable. Ollie is a force of nature. This is just the first day of his new life. 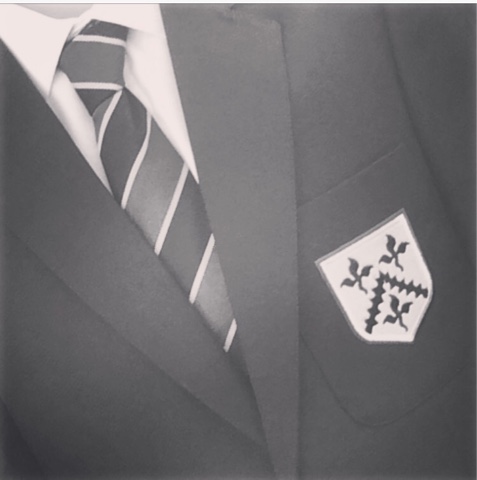