It gets worse. Ollie's refusing all food orally. The only drink he has is a sip of water when he takes his meds. Everything is now via NGT. The mere mention of food brings about an extreme reaction.

He has a dead look in his eyes. He continues to wreak havoc at home; no major damage, just constantly throwing of everything in his path. Our kitchen and hall have been laid to waste more times than I can count. A new part of our punishment is that he now won't talk to us. 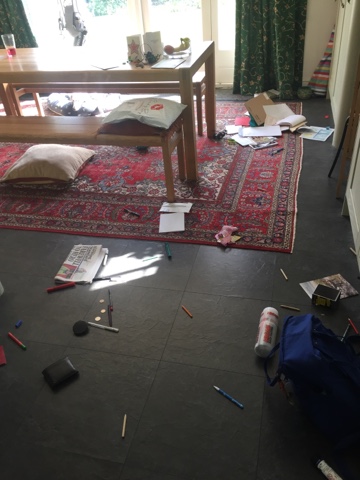 Escape attempts continue. The British Transport Police intervened when he tried to run at Ebbsfleet station. At home, at hospital, in the car, on the street, it doesn't matter where we are. Anywhere is game on. Today he tried to get out of an upstairs window. He is focused on getting away from us. He will try anything to achieve that.

Self harm attempts are ramping up. Head butting seems to be his favoured method: on walls, doors, his knees, and us. For someone so underweight, Ollie is incredibly strong. We have both suffered injuries from his fight.

My husband is the only person in our family who can hold Ollie. He's just too strong for me to safely restrain on my own. Our older son also helps out, and it took all three of us to get Ollie dressed.

We are now at a point where we cannot keep Ollie safe at home, or out and about. Traveling to and from London is very challenging. We don't know what to do; four days a week, as a day patient, isn't enough. But we cannot perform magic and conjure a bed out of thin air - there is still no inpatient space on the unit. How do we do this? How long before someone is seriously hurt?