Ollie wakes, next to his father. He has to be watched, 24hrs a day. He looks exhausted. He gets up, walks silently to the bathroom. When we talk to him, we are met with defiant silence. If we challenge him, he looks at us, then hits himself in the head.

It takes two adults to wrestle clothes onto Ollie. He fights, flailing his limbs, and tries to undress himself again. His spine protrudes, rubbed red. His limbs are bruised. He hits us. He kicks us. He is still silent. 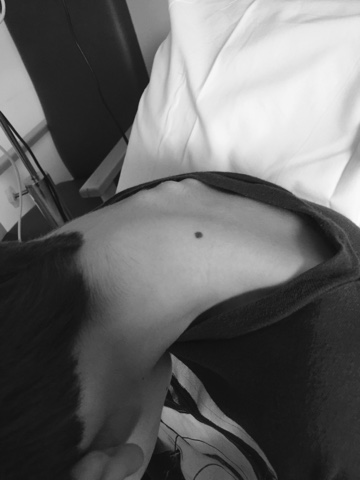 We tell him that we need to go to the hospital for his tube feed. He clings onto the doorframe. He refuses to move. We perform a well-rehearsed ballet of one of us unlocking the door, whilst the other scoops him up. Then there's a swift move out to the car, where he is wedged into the back seat against his will. An adult has to sit next to him, holding his arms and head, dodging attacks. The 15 minute drive is fraught.

Once we arrive at the hospital, the game ramps up. Ollie doesn't want to get out of the car; then he doesn't want to walk. He doesn't want to be carried, either. A wheelchair is impossible as he won't sit. This presents a significant challenge. Last time, we had to ask hospital security to help us to drag him into the building.

Ollie has to be fed via NGT, very slowly. If he has a large feed via syringe, he seems to be able to will himself to vomit. A slow feed means he doesn't have a large volume in his stomach, so he can't make himself sick. We discovered this the hard way, and it resulted in a 48-hr ban from entering his specialist unit whilst he presented a possible infection risk. He doesn't have a bug; he has an impressive control over his stomach.

Due to the trauma of traveling, and the slow speed of his feeds, we now spend all day at the hospital. Throughout this time, he fights us. He ignores the staff, and stays silent. He tries to pinch or bite the tube, tries to pull it from his face. He has made several valiant escape attempts, so we sit on him. We flank him, holding his arms, legs, head. We do this for hours.

Every day he escalates his behaviour. Every day we experience a new depth of anorexia. Our son won't speak, won't eat or drink, or cooperate in any way. Our son isn't here. We are dealing with anorexia in human form.