We've had the call: Ollie will be admitted to the unit for four days a week. He'll have to join the commuters on the rush hour trains, morning and evening. It's not ideal but it is a huge step forwards.

We don't yet know what Ollie's days on the unit will be like. What we do know is that he doesn't want to go, which wasn't a massive surprise to us. He's not sleeping well, he is hitting himself more and more, and he is deeply depressed.

Then there are the meals.

The "brunch run" to the local hospital has become a well-rehearsed daily performance. He resists every day, refuses to get dressed, and refuses to leave the house. We carry him to the car in his onesie, restrain his flailing limbs, and drive him there regardless. For the last few days we have called in reinforcements in the shape of Ollie's Godparents, who have accompanied us to the hospital. This has helped us but has made zero difference to Ollie.

Whilst his brunch-by-tube has been the same every day, his dinners have been getting more and more challenging. He has the exact same meal every day: pasta & sausage, a past-life favourite. This is washed down with full-cream milk. We chose foods than can be eaten without cutlery, and at any temperature. He has the exact same amount every day, at the same time each evening. Attempts to vary this have been wholly unsuccessful, so we have kept it simple. The one thing that is changing by the day is the sheer fight.

Each movement of food from bowl to mouth is agony. Our neighbours have reported that they can hear the screams (our houses are detached, and well-spaced). Each meal takes longer than the last; each one leaves us utterly exhausted. We wonder whether Ollie actually expends more calories in the fight than he manages to ingest. Ollie has to make that movement from bowl to mouth around fifty times, and he tries to hit his head to punish himself after each bite. As he hates sauces, won't touch butter, and refuses anything fried, it's hard to pack calories into those mouthfuls.

It takes two adults 45 minutes to get Ollie through dinner. We are insulted; pleaded with; sometimes injured. We have to deflect these attacks without anger. We are bone-weary but relentless.

So there will be five more of these dinners at home. Then we get a break of two days. Five days seems like forever, but the prize is unimaginable - two whole days off. Will we just sleep? 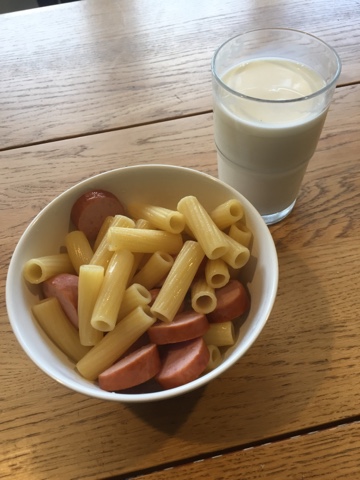