Skip to main content
Copyright The Undulating Runner January 15, 2018
Sometimes it feels like we’re living in a game of snakes and ladders. The smallest things can have us all hurtling downwards, feeling like anorexia is pulling us back towards the darkness. Yet sometimes a small thing can happen and we suddenly leap forwards, and feel like progress is possible. Anorexia rolls the dice. We’re just being moved along, back and forth, trying to get through the days.

I’ve made a very poor attempt at illustrating this. The green squares are good things, the little leaps of hope that propel us towards a happier ending. The orange squares are treacherous, the things that threaten to topple us. We can lurch between these in minutes, hours or days. 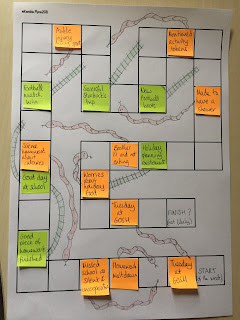 These are just examples from the past week. Things that should have been “safe”, like being given a piece of science homework, can turn out to be dangerous. Ollie’s current topic is energy, and the homework was all about the amount of energy a body needs to stay alive, and to climb a mountain. The maths was straightforward enough, and the subject interesting. But for an anorexic in recovery, calculating the energy requirement for exercise is definitely triggering. Being asked to think about the number of kilojoules in a ham sandwich could be catastrophic for a boy who almost died from starvation.

Other aspects of the week have been positive: a football win, a trip to Starbucks for afternoon snack, new football boots. But these have been countered by the blind panic of being asked to shower - which ended in us relenting, agreeing to just wash Ollie’s hair in the sink and feet in the bidet. Having to see his own naked body for the duration of a shower was just too much for Ollie to cope with.

A part of Ollie’s meal plan is “activity tokens”, extra items of food or drink that he is required to consume if he has done extra activity (over and above a usual day). Ollie’s Saturday football training is an extra activity: it comes with a glass of juice or a small snack. This week, for the first time, Ollie rebelled against and had a huge, angry argument with his dad about it. It took an hour of patient discussion to get him to accept the token.

Family plans are also fraught with danger. We’re hoping to go on holiday in the summer. The excitement of considering possible locations was quickly dampened by Ollie’s worries about food. Googling for pictures of the content of hotel buffets became crucial to reassure him. Some holiday venues are inherently too scary for our once adventurous boy: the fear of unfamiliar food is too strong. But that’s ok. We can work with it. It just means further research.

The game we’re playing is unpredictable. It’s exhausting and unrelenting. We never know how the dice will roll. We just hope that the snakes will get shorter and the ladders longer.