It has been the most incredible week of our lives.
On Monday, the phone rang at midday. It was a nurse from Ollie's unit: he was literally bouncing off the walls. The nursing staff were at a loss and couldn't control him. Ollie was hitting his head on the walls and was clearly in a very dark place. We were asked to come in so that we could try to calm him.
Our son was desperate. Self harming, mute, and on tube feed #121. His six weeks on the unit had not seen much progress. He was uncommunicative, unwilling to wash, clean his teeth or change his clothes. He would not walk to the dining room. He fought the NGT feeds. We could see no light in his tunnel.
My husband spent Monday afternoon at the unit, eventually calming Ollie enough for the staff to be able to take over. We felt defeated by anorexia, and mournfully devoid of hope.
On Tuesday, when the phone rang in the afternoon, my heart sank. I could see it was the unit calling again. I didn't want to answer. I'm glad I did.
The same nurse was calling. She said she had good news: Ollie had managed his morning snack. I was delighted. She then told me that there was more: Ollie had also managed his whole lunch. I couldn't believe it. But there was still more: Ollie had spoken his first words in six weeks. He had said thank you.
My brain struggled with this unexpected information. I felt confused. Delighted, but suspicious. Happy, but frightened. What had happened?
This was just the beginning of Ollie's miraculous week. He has been an absolute warrior, a rockstar, a force of nature. He has truly made a heroic effort and the results have been phenomenal.
Ollie has eaten EVERY meal and snack since Tuesday morning. Not a single tube feed has been needed. He has not had to resort to drinking the replacement (Fortisip). He started the week being spoon-fed by staff, and has ended it by eating independently for the first time since February.
Ollie is now able to walk to the dining room unaided.
Ollie now speaks. After almost eight weeks of silence (with the single exception of a sentence spoken once, six weeks ago), he has resumed talking. Not just a few words: complete conversations. He is able to tell us what he's thinking, and feeling. He is able to recount his experiences and to tell us his plans.
Ollie told us that the anorexia voice is louder than ever. It's constant, even screaming at him in his dreams. It has no face but he pictures it just as a sound waveform. He told us that anorexia is a bitch, a bully, and not his friend. He has decided that he will not listen to the voice any longer. He had felt himself slipping towards the abyss on Monday and decided that enough was enough. He didn't want to be fed by "that fucking tube" ever again. He now wants to get better.
Ollie now cleans his teeth. He has been able to have a shower.
Ollie has sent us texts. To my husband, to his brother, and to me.
Ollie has been allowed out of the unit for gentle walks. He is allowed to play football in the courtyard. He has worked hard in school, completing some GCSE-level English assignments. Ollie met our new dog yesterday, and was able to be affectionate and playful with him.
The changes are unbelievable. Truly astounding. The staff are all excited, and as surprised as we are.
Ollie's mental strength is greater than anything describable. When he was small, he told me that he loved me "as big as the sky", because that was the biggest thing he could fathom. Now, I think the sky looks tiny next to Ollie's huge willpower.
We are acutely aware that this may be a rare and delicious "up" on the rollercoaster that is anorexia. We are nervous about the future, scared that he might crash back down. But we are also immensely excited and thankful that we have our boy back. We have missed him so much. 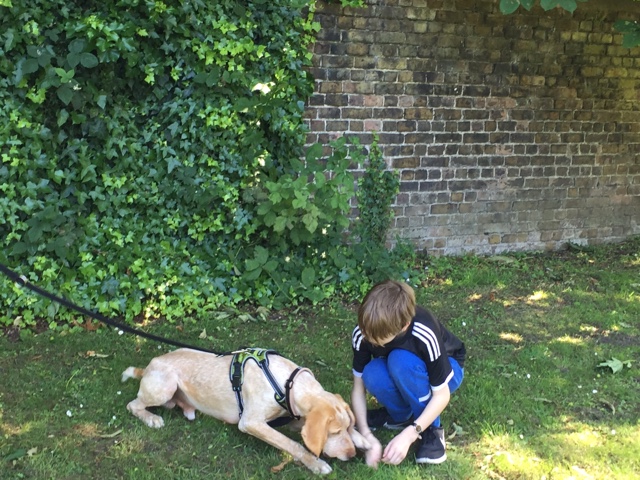