Things that have been broken by our terrified, enraged, anorexic son this week:

A door handle
A light switch
A toilet lid
A chunk of plaster in the kitchen wall
Our hearts. 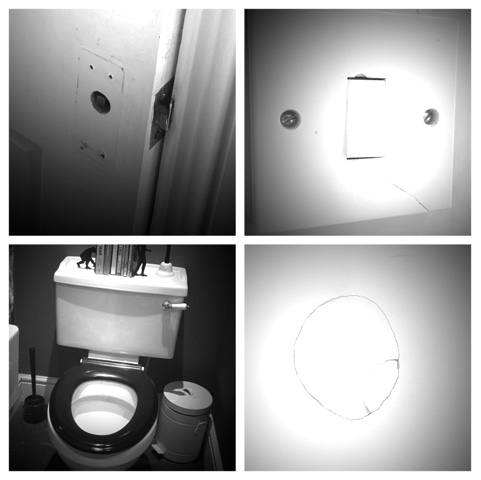 He is eleven and he is in crisis. The illness has taken over so completely that each agonising meal time is an ordeal. We have to hold him; keep him upright. He screams. He kicks, the fights, he tries to claw at his face; he hits himself, and us. He shouts to the voice that no one else can hear. He has bruises to his legs and feet from this fight. He has bruises on his arms from all the needles. He has a tube dangling from his nose which snakes into his stomach. He has a look of terror in his eyes.

So this is our lives. Ollie wakes, and starts to panic about breakfast. He takes his Olanzapine (an antipsychotic drug, not even licensed for someone so young) and we start the timer. He sits, flanked by us, by the table, as we count down ten minutes; he cannot bring himself to start eating. The timer is re-set for his final five minute warning, and we tell him that if he doesn't start to eat before the bell, we drive to hospital. We will have the same number of calories via NG tube. He is trapped. He howls. Kicks. Cries. Begs. Seconds before the bell, he begins. We remind him that food is medicine, prescribed in an exact amount. We must all do what the doctors say. We then help him to bring the food to his screaming mouth, little by little, for half an hour.

He shouts that he hates himself. He needs to die. That he is worthless. That he is doing the wrong thing. He apologises to the voice. His throat is raw from screaming. We persist. We keep talking, keep dodging the flailing arms and legs, keep going. Relentlessly. We try to sound cheery. We recite names of people who love him. We promise him a future of friends, football, school, holidays, anything, everything. We tell him how much we love him, over and over again. He is in torment. We are his jailors, and his oppressors.

When the meal ends, the trauma ramps up. My husband carries him from the kitchen. He cries and howls and holds himself stiffly in the foetal position.

Slowly over the next hour he comes out of this state and begins to beg us all over again. He asks to go out. To walk. To do something to burn it off. His voice sounds alien; his eyes look empty. He is possessed.

In a few hours, it'll be lunchtime. Then dinner. Each time, the rage builds, peaks around the food, and subsides only slowly. Things get broken. Our dog retreats from the screaming. Our older son shuts his door and turns up the volume of the Xbox. We carry on.

Twice, it was too much. The nurses fed him via NGT at our local hospital. It was by no means an easy option; the voice bellowed at him whilst he sat in terror, watching the calories slide down his tube.

Each day is worse than the previous. Each day he slips further. We get the calories in, but that is all we do. We are husks, following orders.