A huge gap since my last post. Not because there’s nothing to tell; I just haven’t had the energy to write.

So, first, an update: Ollie is doing well. He has been discharged from both the eating disorders team and from the general paediatric team in London. We are now under the care of local CAMHS, with fortnightly appointments. For the first time since starting grammar school, Ollie is now attending full-time. Last week, he resumed PE lessons. Academically, Ollie’s doing brilliantly well, and his school agreement is allowing him to stay reasonably calm about homework.

Ollie is growing at a phenomenal rate, around 1cm per month in height, and his weight is on track. As I type, he’s sitting next to me on the sofa, casually eating popcorn and watching football. We still have a meal plan on the wall, but there is considerable flexibility within it. Things are about as normal as they could possibly be.

Is this now it? Is it over? Has anorexia been cornered, beaten, squashed? Is Ollie now healthy? Can I open my eyes now?

Not quite. Not yet.

Our son still has his monster, tucked away in his brain. His dark passenger. It’s just not quite as obvious.

Ollie’s temper is fiery and he is quick to descend into rage. He is incredibly self-critical. The voice still tells him that he’s worthless, and that his mistakes are inevitable as he’s so useless. Ollie assures us that the voice no longer shouts about food, but chips away at his self-esteem. We hold our breaths whenever anything negative happens: a lost football, a flippant comment from a classmate, a tricky bit of homework. Anything can trigger a full-on teenage tantrum.

And there’s the thing: where does anorexia stop and normal teenage drama start though? Our older son is mellow and very rarely argues or angers. Perhaps our older son is unusual, and Ollie’s just a normal almost-13?

Some aspects of Ollie’s behaviour are more obviously anorexic. Anxiety about food is till there, along with almost obsessive questions about it. Ollie’s favourite conversations are about favourite foods. “What’s your favourite fruit? Snack? Meat? Vegetable? Sandwich filling?” - this is a pretty standard line of questioning. When we’re shopping, Ollie will spend ages looking at takeaway sandwiches. He analyses meal-deal combinations. It’s weird, but not worth-having-an-argument weird.

Then there’s sport. When Ollie was initially slipping into anorexia, he began to exercise more and more. Eventually he collapsed in the garden, unable to stop himself. Now that he’s “well”, he’s playing football again, and he’s back in the garden doing drills. The spin bike that almost killed him has stayed locked away in the shed, but the temptation of the outdoors is still there. We set time limits on training, and try not to panic when Ollie pushes the boundaries: “just let me score one more goal and then I’ll come in, promise”.

Ollie attends both football and team fitness training once a week. He eats extra on those days; so far, the balance is right. His weight is still on track. During half term, we went on a ten mile family run (at my pace, so not fast), played golf, and hiked with the dog. Ollie loves it all. We want him to love it all, it’s good, it’s healthy, but it’s terrifying. Where’s the line? How can we let him be the talented young athlete he is, whilst keeping a lid on anorexia? What if we let it go wrong? What if we fuck it up?

We can’t take our eyes off the ball.

This week, I’m going to try to write a post every day. I’ve been thinking about so many things that I’ve wanted to get down on paper. Stand by for an extended stream of consciousness. 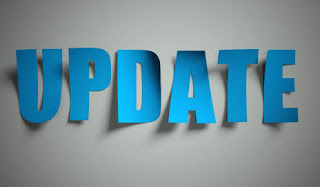