While most families are starting to get excited about Christmas, we’re bracing for impact. This time last year, Ollie was unhappy, but we had no idea about the freight train that was about to hit us all. We thought that the long autumn term, along with the pressures of the 11+ and choosing a secondary school, were exhausting Ollie. He was eating normally and exercising his usual amount - which was every day - and we thought the Christmas break would shake his misery out of him.

On Christmas Day 2016, we sat down to our traditional roast turkey. Ollie’s all-time favourite food was roast potatoes, and usually he would eat a mountain of them. On this day, for the first time in his life, he only ate a couple and refused seconds. It was a small thing, not really noteworthy at the time. But with hindsight, this was the moment when he first restricted his food in front of us.

Ollie now tells us that he had already heard the bullying Anorexic Voice earlier in December 2016, and had done small things like eating an apple instead of crisps, or cycling a bit further on his spin bike. But these were unknown to us, as he was an independent young man who got on with things by himself. Christmas Day was the day that the Voice became so loud that he had to do as it said, even in the middle of Christmas lunch.

Over the following months, Ollie’s illness was revealed and very nearly took him from us. By mid-January we had been referred to CAMHS by our GP. A few weeks passed and Ollie’s behaviour became so dangerous that I howled on the phone to CAMHS and got an urgent appointment for an assessment. The diagnosis of anorexia surprised us all when he finally got the specialist assessment on the 21st February. Ollie ate less and less; he ran into the road and threatened suicide; by 1st March the outpatient CAMHS team told us he had to be admitted to a unit. Yet there were no beds.

Ollie was rushed to hospital by ambulance on 2nd March. His heart rate was down to 32bpm. He was a skeleton, digesting his own organs. Our son was starving right before our eyes. By 9th March Ollie had his first NG tube fitted, and spent five days in our local hospital. Meanwhile GOSH were assessing him and helping to support both us and our local hospital.

What followed during the next weeks will stay in our hearts forever. Attempts to manage Ollie as a day patient at GOSH failed. Daily visits to our local children’s ward were needed to NG feed him. Ollie was violent, desperate and begged us to let him die. Our lives were completely focused on only one thing: keeping Ollie alive. It wasn’t until 24th April, with Ollie mute, self-harming and completely uncooperative, that he finally got the inpatient bed.

The rest is history - well the rest is in this blog - and now here we are. Back at Christmas. We’re not a Christian family, so Christmas is more tradition than religious festival: my own shaky faith in God ended abruptly with the loss of our second pregnancy. Our sons have a good understanding of faiths but have chosen to be atheists, at least for now. Christmas, then, is pretty much about family get-togethers, feasting and presents. This year, we’re steering clear of family, and food is still an incredibly tricky subject. Add to this Ollie’s anorexic view of not deserving presents, and what is left?

Anorexiaversary. This Christmas has been replaced by a milestone no one wants to celebrate. Why would we want to decorate the house? Or make special food? Or buy presents that Ollie doesn’t want? Why should we have to disrupt the carefully managed routine that keeps Ollie stable?

The obvious answer is Adam, our older son. He does want presents, he loves eating (with his insatiable teenage appetite, Christmas means FOOD), and he’s looking forward to the time off school. Adam’s year has been horrendous, watching his brother on the brink, weathering the storms at home, being very much sidelined as both parents traipsed to and from hospital for months. Adam deserves a Christmas. He deserves gifts and feasts and decorations, sleeping in and eating chocolates for breakfast, festive films and fun days out. We can’t opt out of Christmas for his sake. Yet opting in to Christmas is very difficult for the rest of us.

Once again, anorexia has muscled in. We can’t ignore its loud voice, or pretend it’s not there. We have to navigate our way around the obstacles and find a way of giving Christmas to Adam without letting Anorexiaversary hurt Ollie. 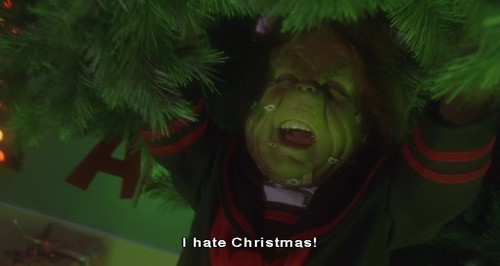