We have just returned from a week away in the Scottish Highlands. There were six of us, wedged into the car: two adults, two children, one dog, and anorexia. I have come to think of anorexia as a separate being, who has been thrust upon us for a indefinite period of time. It is oddly reminiscent of a completely different time in our lives.

A few years ago we hosted a young Belarusian boy, Nikita, in our home for four consecutive summers. He was tiny, malnourished and completely unused to our way of living. Nikita spoke no English, and was an only child: he had very little concept of sharing. He came from a very deprived area of Belarus, still contaminated by the fallout from Chernobyl, and had very few possessions or prospects. The idea was to give him some respite from his terrible home life and to nourish him with the food and experiences we are lucky to have.

Nikita was a year older than Ollie, although he was physically much smaller due to his meagre diet. This made the natural “pecking order” tricky to establish. Nikita needed a huge amount of parental resources, as we tried to communicate with him and care for him. Nikita barely ate, and we spent a great deal of time and energy trying to find things he liked. When Nikita first came to us, he was only seven years old, and the then six year-old Ollie became understandably jealous of the attention. Although we only hosted Nikita for four weeks at a time, family life became very challenging and everyone had to adjust their lives - so much so that it always felt like a very long time. Although we became fond of Nikita, adding him to our family was not easy.

We no longer see Nikita, but it struck me that anorexia is not a dissimilar addition to the family. It is like a distant relative that we are forced to look after. It disrupts the family, sucks up resources, and affects Ollie most of all. We can’t ignore anorexia, or leave him at home when we go away. As much as we try, we don’t really understand him, and we don’t know how long he’ll stay. Maybe months. Probably years. Hopefully not forever. We don’t want to anger him, but it’s not fair to everyone else if we keep making special allowances for him.

So off we went, on a ten-hour drive, to a beautiful loch-side cottage in the Highlands. We took with us all our outdoor gear, the dog crate, foil blankets and walking boots, and a strict meal and activity plan. Each day had to be stage-managed so that Ollie’s six meals were at the right times. We had agreed with Ollie’s specialist that we would keep a count of his hours of walking and activity, and would then carefully match these with an increased calorie intake. We couldn’t just decide to go the pub for a spur-of-the-moment dinner; it had to be planned into the week in advance. When we did eat out, we couldn’t let Ollie see the menu, as the calorie counts were listed. I had to give him a small choice of three pre-picked meals, that would closely mirror his intake requirement for that day.

The holiday was a challenge. We adore the mountain scenery and love being outside. We took our young dog with us, who had the best week of his life, splashing in lochs and streams, sniffing out grouse and seeing deer for the first time. We walked as a family, and this was hugely difficult for Ollie’s anorexic anxieties. Ollie constantly compares his food and activity with his older brother - and usually that reassures him, as his brother is a lazy, ravenous teenager. On holiday, both boys were suddenly doing identical amounts of exercise. Ollie felt compelled to constantly calculate how much his brother had eaten in any meal or snack, and he kept a tally in his head. The brothers bickered, as brothers do, but Ollie tended to overreact and fly off the handle. We felt that we had to treat him with kid gloves, as any criticism ended in meltdown. Anorexia was that needy family member that no-one dared to tell off.

We did our best to “be on holiday”. We tried to relax. We ended up pretending to be relaxed, whilst constantly hoping for an actual break. We held onto the old adage of a change being as good as a rest, but all remained quietly unconvinced.

We returned home on a Sunday, ready for the boys to go back to school on the Monday. My husband had booked the day off so that we could have a few hours alone together, to de-brief and to just have some peace and quiet. We simply needed a few hours without Ollie, gathering ourselves together.

Monday morning dawned, and it was immediately clear that anorexia was overwhelmingly in charge of Ollie. He was overcome by a number of small anxieties and became dark, uncommunicative and uncooperative. We took some verbal abuse and a kick to the car. Ollie’s brother went to school; although we had managed to get Ollie as far as the school gates, he then refused to move, cooperate, or speak. The morning was spent with us taking shifts of sitting with a foetal, silent Ollie on the stairs. Our adult conversation time was over before it had begun. Anorexia settled in for the day, disrupting plans and making our son utterly miserable. The holiday was well and truly over. 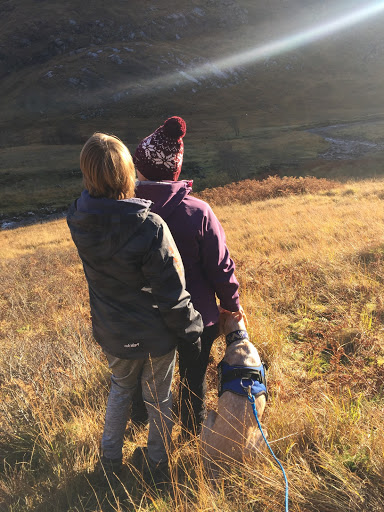