Skip to main content
Copyright The Undulating Runner May 03, 2017

Ollie has been competitive since he was tiny. Perhaps having a bright older brother encouraged this; or maybe he just inherited the trait from me. At school, on the football pitch, and on the running track, he has always been talented. As parents, we have been delighted by his successes. We have tried to remind him that it's not just about winning, but we have grown accustomed to his achievements. We had no idea how this could almost destroy our son.

Ollie's other defining characteristic is his sensitivity. He takes criticism to heart, hates being told off, and worries. His nemesis is injustice of any kind. He has always been able to voice his thoughts and we have been very open and honest with him.

Anorexia is a cruel, devious, incredibly complex disease of nightmares. It starts as a whisper and ends in a deafening roar. It started as a quiet suggestion in Ollie's ear, telling him to eat an apple instead of a packet of crisps. The voice started to speak to him more and more; he listened intently. He did as the voice told him to. He exercised more and more, ate less and less. The voice was his friend. The voice was just trying to help him, to make him better at sport, to make him a better person.

We tried to drown out the voice. We tried to reason with Ollie. We tried to separate the anorexia voice from Ollie's own. But the harder we pushed, the more the anorexia fought back. Ollie was struggling to see out from behind the fog in his head. We could see that Ollie was slipping away from us. What we couldn't know was just how much the voice was bullying him.

The anorexia exploited Ollie's two major personality traits. It appealed to his competitiveness: it told him to work harder in order to get worse. Ollie was compelled to escalate the anorexic behaviour every day. The voice commanded him to stop cooperating with us, to fight all attempts at feeding him or treating his illness. The voice told him to get away from us, his parents, as we were trying to kill the anorexia. His entire focus became the competition.

I have been reading a great deal about anorexia, and came across Christie Begnell's work. One of her drawings shows this competition perfectly. For Ollie, he had to do everything to win. He couldn't see that winning was going to kill him. 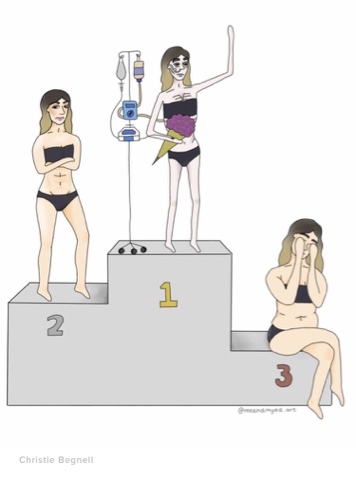 Ollie's other main trait, his sensitivity, made him vulnerable to anorexia's relentless bullying.  The voice no longer whispered. It screamed. It told him he was worthless, that he didn't deserve any comfort or joy. The voice berated him if he was fed, it punished him for talking. Eventually he stopped speaking at all. The voice commanded Ollie to hurt himself for allowing himself to watch TV. The voice bellowed in his head. He had no respite.

So this is Ollie's life now, this is the monster he has to fight. He now lives away from us, surrounded by anorexia. He has to find his way back home. It's such a long way.